What keeps Portuguese food exciting is how varied it is according to where you are in the country. Although Portugal has some amazing modern and international restaurants, the majority of restaurants and taverns are very typical of traditional Portuguese cuisine – recipes that haven’t changed in decades.

Here is a snapshot of 10 very poplar foods you will find across Portugal. Why not try them all?

Portugal is known to have some of the best fish in the world and grilled sardines (sardinhas assada) would have to be a favourite. During the warmer months, just wander down the street and many restaurants are grilling these fish on charcoal barbeques ready to be eaten simply, perhaps with a squeeze of lemon and a glass of green wine (Vinho Verde). Make sure the sardines you are eating are as fresh as possible, they are at their peak from June to October. These grilled sardines will be much larger than the ones you find in tins so the bones and gut should not be eaten. 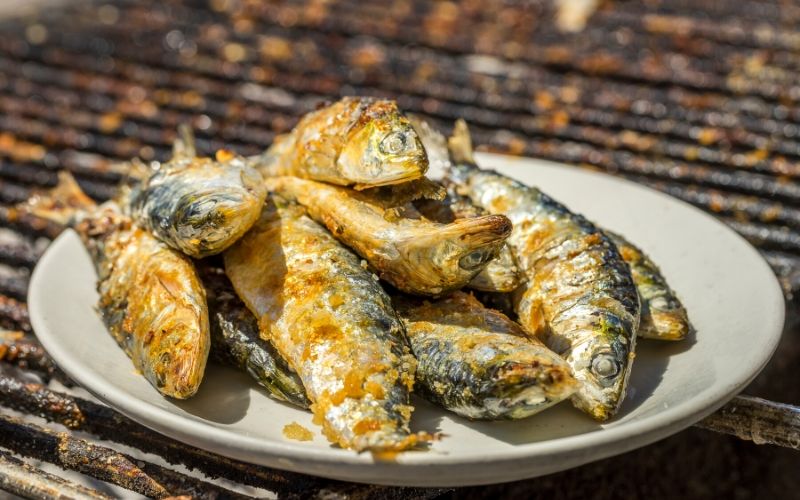 Although known as the dish of Porto, Francesinha can be found all over Portugal these days, especially in the larger cities. It is kind of like a sandwich, made with bread, cured ham, a smoke-cured pork sausage known as linguiça, fresh sausage such as chipolata, steak or roasted meat. It is then covered in melted cheese and topped with a thick spiced tomato and beer sauce. Forget your diet when enjoying this one. 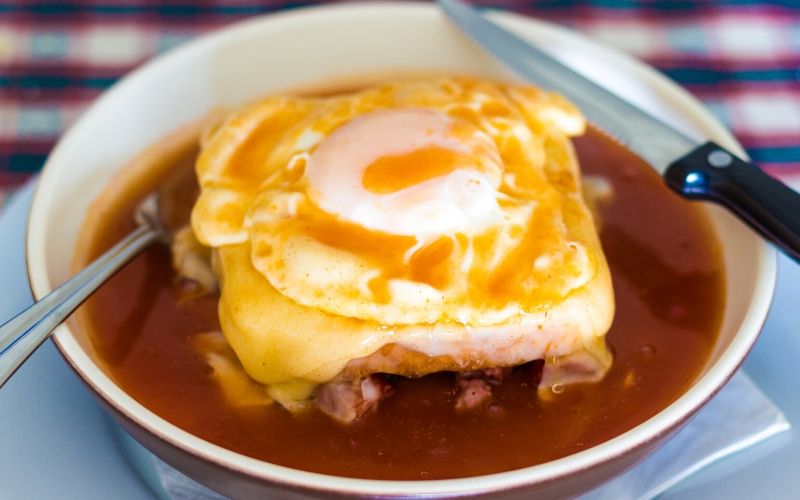 Typically, Portuguese food isn’t spicy so if you are a fan of spice then Frango Piri-Piri, or Piri-Piri Chicken may be exactly what you are looking for. Probably Portugal’s most famous dish (with thanks to food chains such as Nandos) this chicken is often spatchcocked, then marinated with a combination of garlic, olive oil, salt, lemon juice and of course Piri-Piri chillies and/or basted with the marinade during being cooked on coals. Served with a simple salad and rice, this dish won’t quite make it into fancy restaurants but perfect for that quick meal at home or eating out. 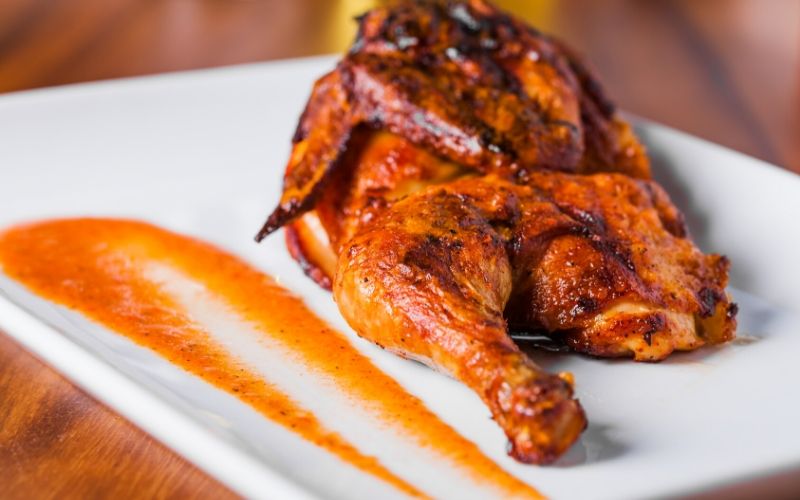 These Portuguese custard tarts (or also known as Pastel de Belém) are famous all over the world but the original recipe created by the Catholic monks of the monastery in Belem in Lisbon is still a closely held secret. You can visit the Pastéis de Belém factory for one (or more) of these delicate pastries often still warm from the oven. The factory is one of Lisbon’s biggest tourist attractions so be prepared to wait in a queue if you want to take away. The fastest way to enjoy them is by going inside and having table service. On an average day, it has been said they make over 20,000 tarts! 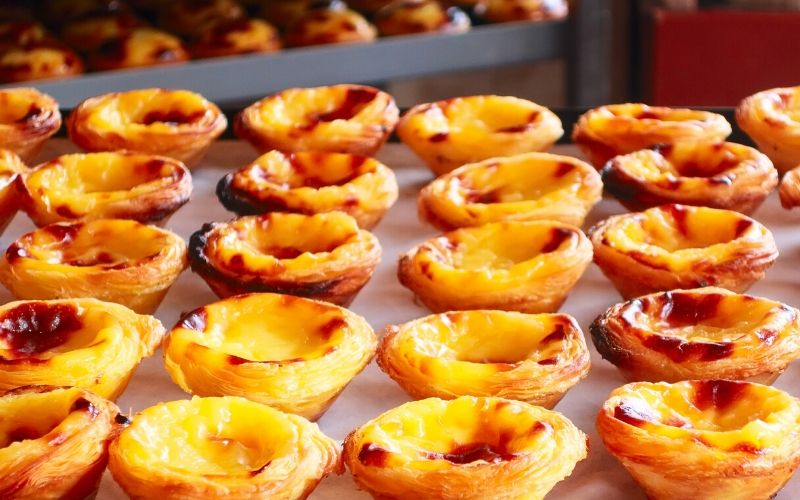 A recipe of shredded salt cod (bacalhau), fried onion, straw potato chips and scrambled eggs topped with black olives. A great combination of flavours – sometimes on the salty side – and very popular with the kids. You will find this dish in most traditional Portuguese restaurants, probably because it is very economical to make. I like to top my with Tobasco or chilli sauce… but you will need to ask for a spicy sauce (molho picante) as it isn’t a traditional Portuguese thing to do. 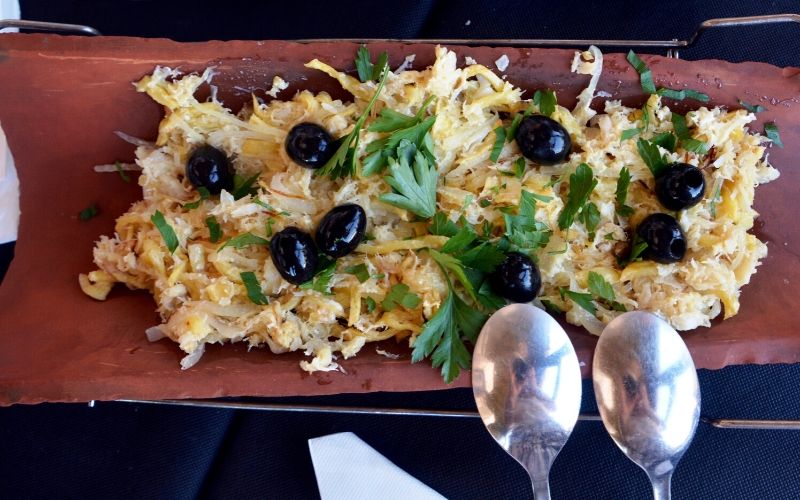 The Portuguese are huge consumers of pork and the Bifana is their version of a pork sandwich or roll. To make a good Bifana, the bread roll needs to be light with a crunchy crust and the strips of pork loin marinated in a base of garlic, herbs and wine. Across the country, you will find many variations of the marinade with the addition of lemon juice, chilli sauce and/or vinegar so if you can, try a few to find your favourite. Mustard and onions are optional. Bifana food trucks can be found outside concerts and venues as it is a very popular late-night snack and in a way, the Portuguese answer for “street food”. 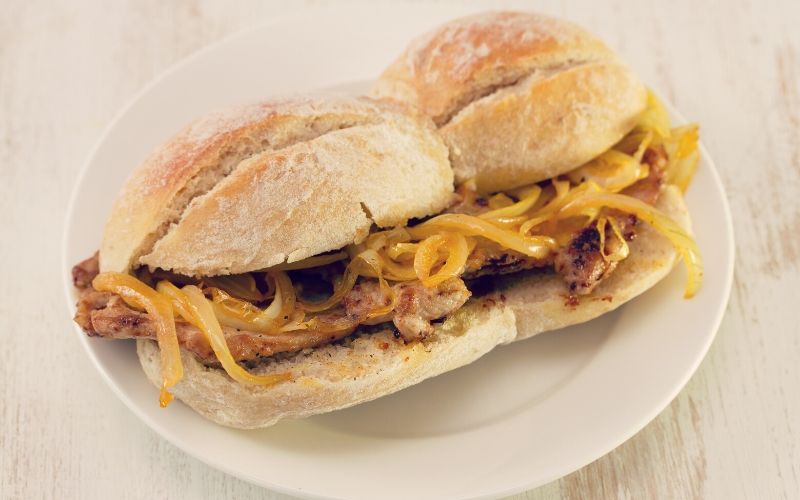 Visit inland Portugal, where fish has historically been harder to buy and you are very likely to find Cozido a Portuguesa on the menu. This is a combination of boiled meats, smallgoods and vegetables such as turnip, cabbage and potato, and when cooked together creates a warm and comforting dish. Not for the faint-hearted, the meats used are often the cuts you can’t do too much with such as pig snout, tails and ears along with a range of chorizo and morcela sausages (blood sausage) and farinheira, a sausage made with flour and meat. You can now find this dish all over Portugal, with some restaurants having it as a once-a-week menu special. 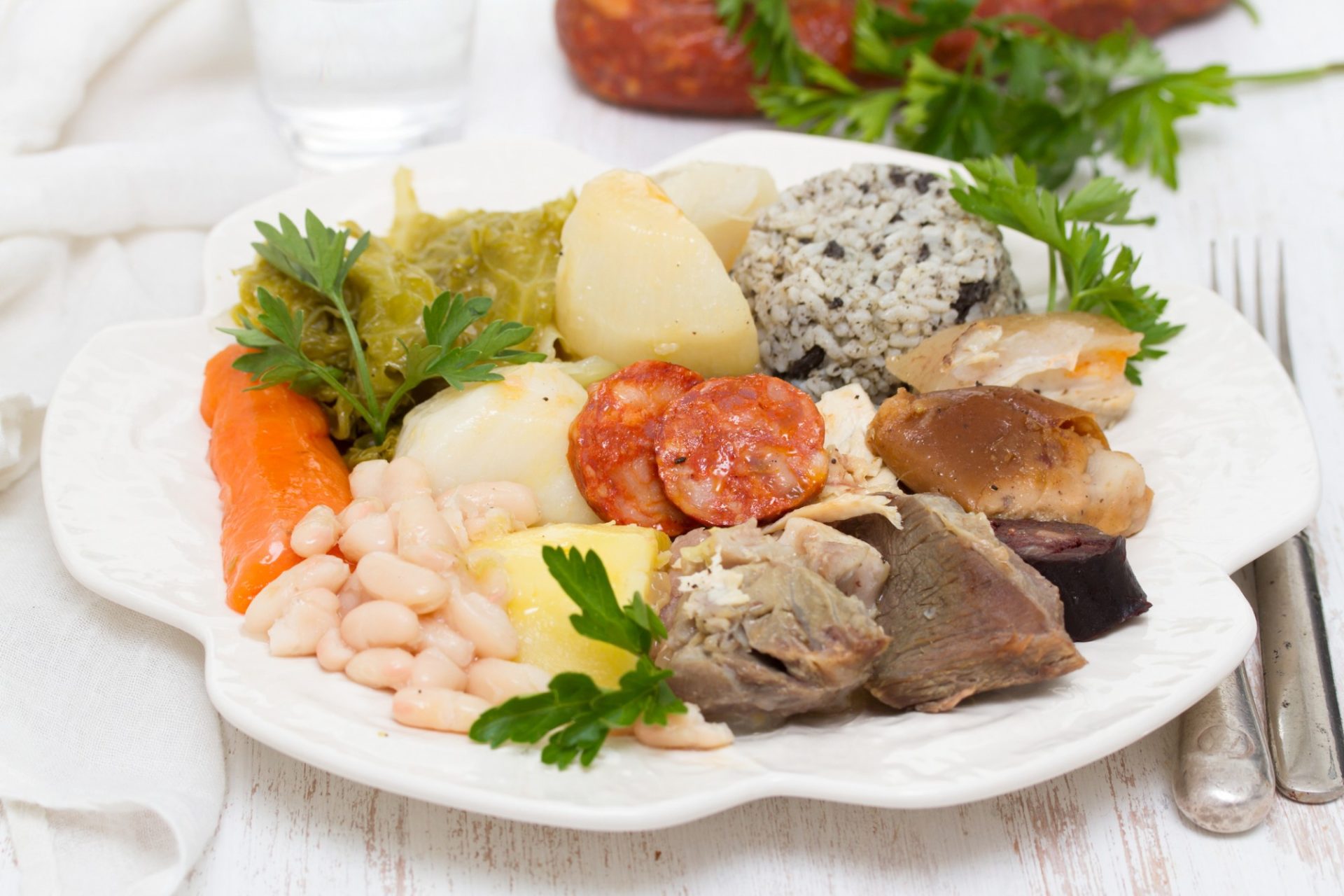 If you are lucky enough to be in Portugal over summer and head to one of their many amazing beaches, you would be very familiar with their Bolas de Berlim. As beachgoers relax in the sunshine, hard-working locals walk up and down the beach selling these favourites by calling out: “Olhà bolinha!” (Look here, the little ball!). You can get two varieties: plain or filled with an egg yolk-based cream or custard. They are always coated in coarse sugar so you have to take a swim afterwards to rid your sticky fingers. Not too dissimilar to doughnuts you will find around the world, what makes these ones so special is the location to enjoy. 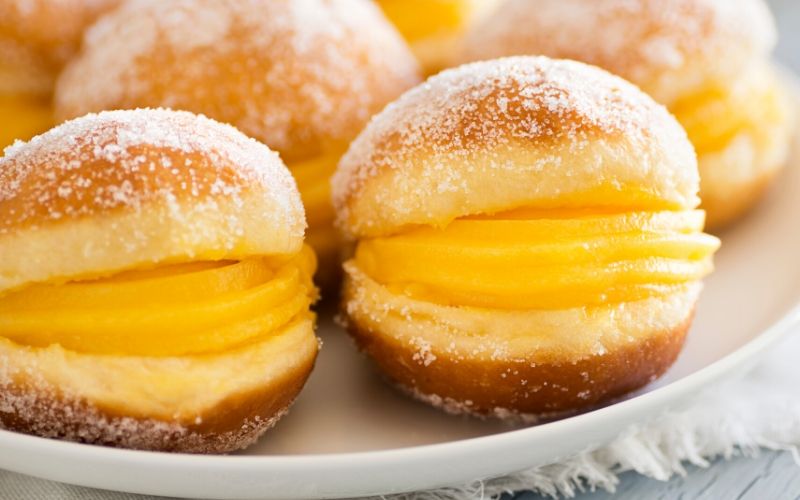 Portugal’s version of “surf & turf”, this classic dish originates in the Alto Alentejo region but is now available throughout the country. Cubed pieces of pork loin are marinated in a combination of wine, garlic, bay leaves, Piri-Piri and smoked paprika (where the Spanish influence comes in due to Alentejo bordering with Spain) then cooked with small clams (amêijoas). Often served with fried cubed potatoes, but some restaurants replace with chips. The true version of Carne de Porco a Alentjana uses Iberian Black Pig which has a higher fat content marbled in the meat – the “wagyu beef” of the pork world. 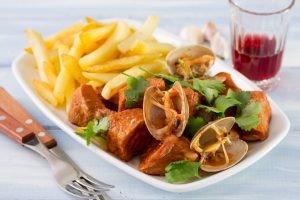 Last but not least, Polvo a Lagareiro is a seafood dish found throughout Portugal made from boiled then baked octopus (polvo), potatoes, garlic and olive oil. When the potatoes are cooked, they are then “smashed” for serving, a preparation called “a lagareiro”. The dish is served with sprinkled coriander (cilantro). When served you will often find a lot of olive oil that has been infused with the garlic during cooking. Don’t let this go to waste! Grab yourself some bread and dip to enjoy. You may also like Bacalhau a Lagareiro, a variation of this recipe in which salted cod replaces the octopus. 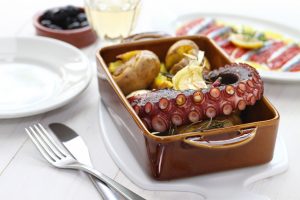