Excerpted from The Winding Road to Portugal: 20 Men From 11 Countries Share Their Stories

I’d opened a café in an office building in London owned by a guy who was insanely wealthy. And what I came to realize is that he didn’t have any interest in investing in my business plan to open a chain of cafés, he just loved the fact that he owned a café in his office run by one of the cities best baristas! After a couple of years, we terminated our agreement. I went to work for a friend at his coffee shop and I began flirting with the idea of leaving the UK.

Ben was back in London, working as a surveyor, after 4 years in the Royal Engineer Army Corps. He was getting into good wine and contemplating going freelance so he could earn more money and open a wine bar. We were both at a point where we were thinking about the natural next step: of opening a business together, a speciality-coffee café and wine bar, and of one day settling down somewhere and having families.

Knowing full well that London was too expensive for us, we made cost-of-living spreadsheets for several possible countries and we also had criteria that had to be met: great surf, good weather, diverse culture, epic food, wine and beer, and a mellower lifestyle. Bali, Berlin, and Amsterdam didn’t make the cut, and even though I’d been to Portugal surfing a few times, it didn’t register as a possibility.

But then a guy I knew from the coffee shop kept saying to me that Lisbon was the place to be! He said, “I’ll put my money in if you guys open up your café in Lisbon.”

He offered us a fully-funded reconnaissance trip to check things out. Ben had some serious reservations about this bloke, who was buffed up, covered in tattoos, and doing private security for high-up Middle-Eastern dudes, which to Ben translated as ‘mercenary’ or at least ‘gangster.’ Regardless, in October 2018 we took up his offer and came to Lisbon for four days.

Over the weekend, two of our guy’s henchmen, equally big and buffed and covered in tattoos, picked us up in a Mercedes and took us across the bridge to Costa de Caparica for dinner. It was a very pleasant evening. But they were literally throwing money at us! It was all too easy and sweet. We figured we were being set up to wash money. We made a point of saying we’d have our accountant go over the numbers, and that was that! We never heard from them again.

On our remaining night in Lisbon, we went out for a few drinks and walked along Largo do Conde Barão, looking out for shops and spaces for rent. While Ben was on the phone talking to Dad about our weekend, he managed to step into a pothole and keel over. As I was helping him up, I saw a kebab shop on a corner site, with outside seating. Right then, I knew it was a great position with potential. I took pictures. Two months later, I came back to Lisbon, showed the pictures to a real estate agent who basically said we’d never get that space. It’d been a kebab shop for years with no sign of folding.

In January 2019, the agent called us, “You’re never going to believe this, the kebab shop’s for rent!” He said. 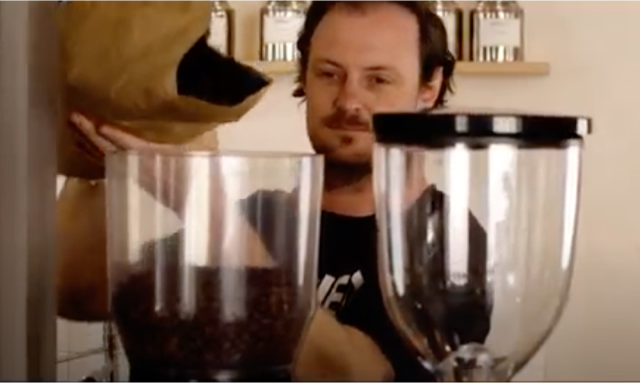 Once we’d both decided to quit ‘chasing the Gucci Bag’ in London, and settle for the simpler life Portugal was offering, we moved over and started renovating and setting up the space with money from our one investor and ‘Ben’s army stash’ – that was May 2019. We opened Neighbourhood, our speciality-coffee café and wine bar, September 2019 and our plan is to eventually open several more cafés.

Her book, The Winding Road to Portugal is available on Amazon.