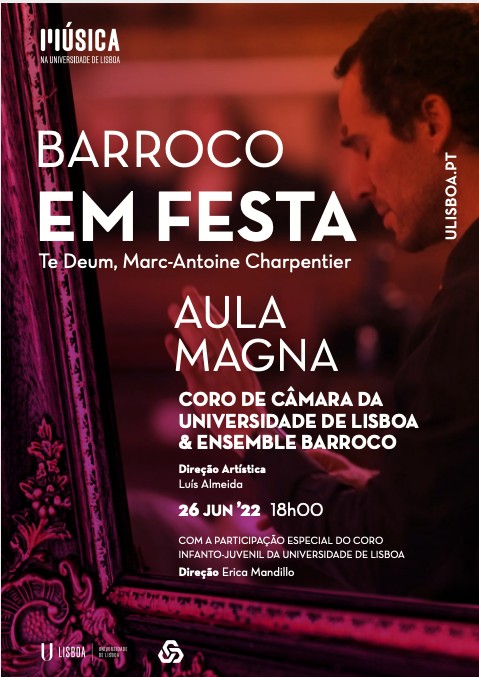 Under the direction of Maestro Luís Almeida, Barroco em Festa is the concert that celebrates the 25th anniversary of the Lisbon University Chamber Choir .

The concert opens with a journey through the works of illustrious Portuguese Baroque composers such as António Marques LÉSBIO, António TEIXEIRA and Francisco António de ALMEIDA.

This concert also counts with the special participation of the Children’s Choir of the University of Lisbon , under the direction of Erica Mandillo, who will interpret Três Esconjuros , a landmark of Portuguese choral music of the 20th century, in an adapted version by Fernando LOPES-GRAÇA, and Sã qui turo zente pleta , Portuguese villancico from the 17th century, and the Baroque Ensemble with theConcerto in D minor for two oboes RV535 by Antonio VIVALDI, with Pedro Castro and Luís Marques as soloists.

In the end, the University of Lisbon Chamber Choir and some of its former elements join the Baroque Ensemble to, together, celebrate this 25th anniversary with the iconic work Te Deum by Marc-Antoine CHARPENTIER.