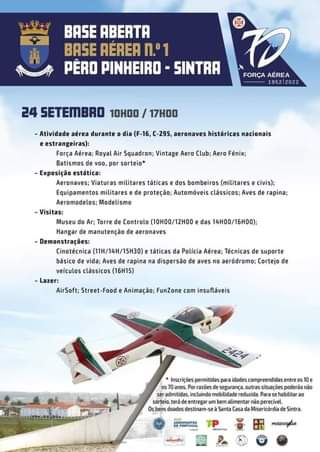 Airbase #1 – Sintra and the Museu do Ar (Air Museum) promote “Airbase Open Day” with several activities open to the public, in September 24th, from 10h00 to 17h00.

Along the day you can travel through the history of aviation and know several national and international historical aircraft, visit the permanent exposition, walk by some airbase services and have a flight baptism.

Flight baptisms will be carried out by drawing lots and registrations are intended for people aged between 10 and 70 years. Participation will only be accepted after delivery of a non-perishable food item, which will later be donated to Sintra’s Santa Casa da Misericórdia.

At the Air Museum you can visit the patent exhibition composed of aircraft, tactical military vehicles and firefighters (military and civil), military and protection equipment, classic cars, birds of prey, model airplanes and model making.

During the day, the space will have leisure areas such as AirSoft, Street-Food and animation, and FunZone with inflatables, so you can have an unforgettable day.