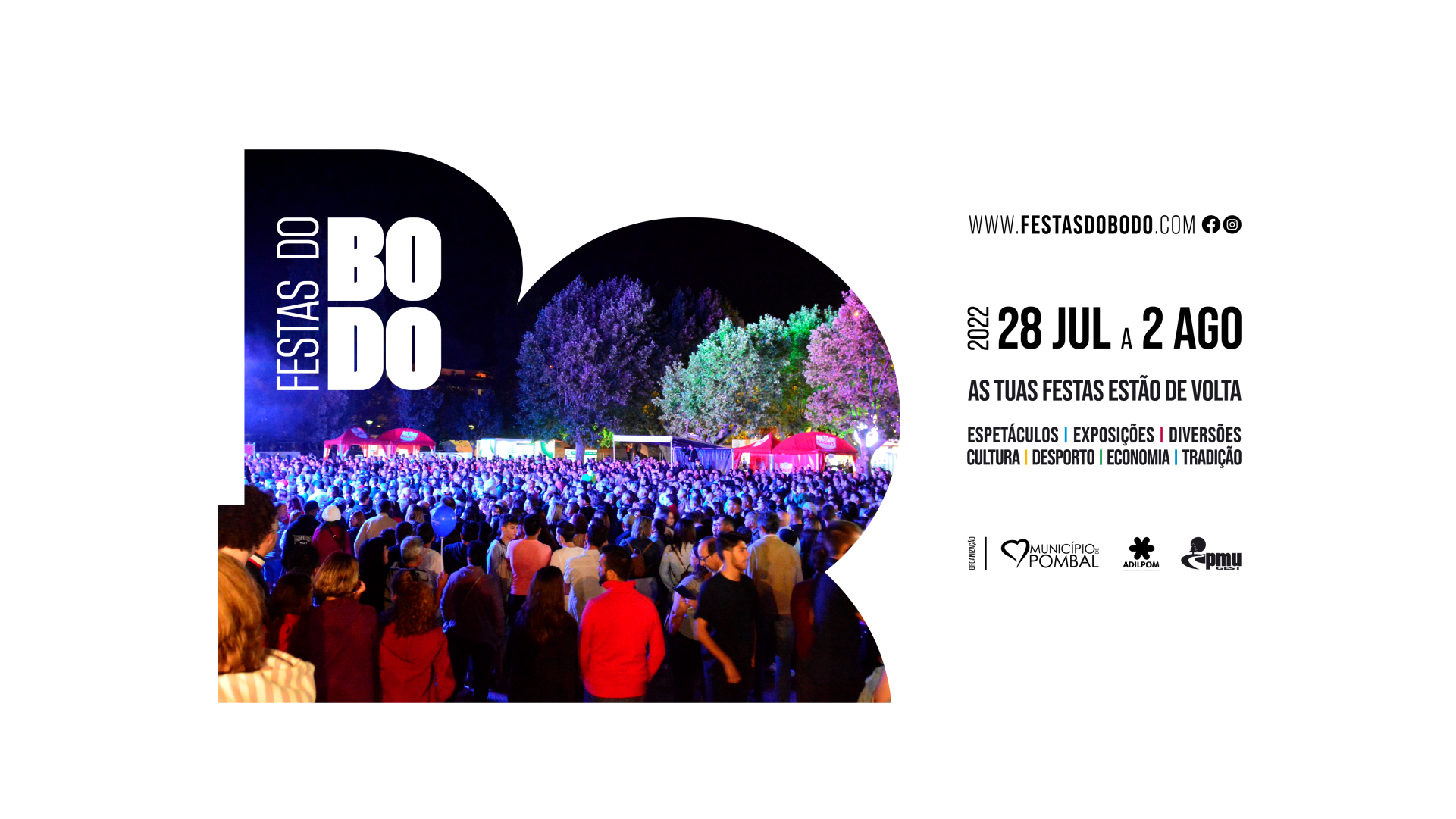 BODO’S FESTIVAL
A TRADITION TO KEEP.

With a remote origin, the traditional Bodo Festivities are exhausted in time. Feast of the People for the People, its popularity still lasts today, perhaps with a spirit already diluted in time, but preserving the tradition of being the most important festivities of Pombal county.

The legend connects the bodo festivities to a plague that hit the people of Pombal and to a mythical D. Maria Fogaça, a very devout person who gave origin to the secular festival. Tradition tells us that a plague of locusts and caterpillars afflicted the people of Pombal, boldly invading their homes, contaminating the food, and even falling in clouds inside the pots where women took the water, forcing the use of a cloth to strain it. This vexation was so unbearable that it forced the people to go to St. Peter’s Church, then the town’s main church, and there they began a procession of prayers, which ended in the Chapel of Our Lady of Jerusalem. A mass was sung, promising a party, if it would deliver them from such a great calamity.
The Lady of Jerusalem quickly answered the pleas and supplications of the afflicted people, because the next morning the terrible enemy had already evacuated the fields and crops. When the miracle was recognized, a new solemn mass was celebrated in thanksgiving for the benefits received, and the feasts were immediately set for the coming year.

The following year, D. Maria Fogaça decided to take charge of the total expense of the religious feast, such was the effort that there were canes, skirmishes, bulls, fires and dances. At this party, two large cakes were offered to the village parish priest, which came out of extraordinary greatness, when they were thrown into the oven, one was misplaced. A servant of the house, invoking the name of Our Lady of Jerusalem, dared to quickly enter the oven, fixed it and came out unharmed. This fact immediately spread to all the people, as a new miracle, and gave rise to the bodo festival. From then on, the party was held with reckless devotion to the cake, which the population gave the name “fogaça”.

The festivities that were initially held at the end of June, were now held on the last weekend of July, as it was more in line with the harvest calendar. However, during the previous four weeks, ceremonies in honor of the Lady continued to be promoted. For this, on the last day of the festivities, the Chamber nominated four mordomos, each one from different couples, who were in charge of the feast, one of them would come on the first Friday to look for the flag of Our Lady of the Cardal that he would take to his couple.

On Saturday and Sunday morning after the banquets, butlers and guests came to the village on horseback (cavalhadas), bringing in front a boy dressed as an angel, went through the streets and around the church, where the angel recited the loas (verses referring to the miracles), finally they would attend the vespers sung by the priest in the chapel of the Cardal. The remaining mordomos in the following weeks repeated, until the solemn feast took place in the last week.

During the last week, on Friday there was a horse race, then at eleven o’clock they lit the oven, where they burned four to six carloads of wood, and at the same time in the convent, six women dressed in white, as if they were cushioned, proceeded to make the cake, which took six bushels of wheat. The cake was round, made of unleavened flour. From six to seven in the afternoon there was a procession opened by the mayor, who carried a flag of Our Lady of the Cardal, followed by the brotherhoods. Four men with the cake on a baker’s stretcher flanked by women who had made it, the litter with the image of Our Lady of the Cardal, the priest, the philharmonic and many people, went around the streets of the village, then heading to the site of the oven, and the man who was to enter it, spent the whole day under the litter to pray. When they arrived at the oven, the cake would go to the oven and they would bring the litter as close as possible to Our Lady. The man took a carnation from Our Lady’s hand and walked to the oven, almost always dressed in black and wearing a hat with two peaks and at the moment that the various men tried to put the cake in the oven, the man who had to enter said “Viva Nossa Senhora do Cardal”, then put the carnation in his mouth, put the hat on his head and entered along with the cake, went around it, as if to fix it and came back, took off the hat and renewed the values to the Virgin, repeating “Viva Nossa Senhora do Cardal”.

Procession As soon as the procession returned to the church, the mouth of the oven was covered with adobes of earth. The big square of the Cardal where this happened was filled with people and it was not heard the greatest noise during the scene of the oven, and it was clearly heard the cheers that he gave, either at the end of each turn, or when he left. On Saturday there was mass in the morning and a party as on Friday. On Sunday at twelve o’clock they would take the cake from the oven that almost always came toasted or burnt and put it on a decorated floor to travel through the village in procession, finally staying at Misericórdia until the following Wednesday, when it was distributed to all residents of the village, but to “do it he needed a saw, because in another way it can not be done, because it is very dry & annealed. It is also said by tradition that in the early days a barrel full of wine was placed and quarter sheep and fish sticks were distributed. Perhaps what in the sixteenth century, has made D. Manuel, to prevent some of these excesses, banned the festivals of bodo, but taking knowledge of the devotion and miracles of Our Lady of the Cardal, allowed to continue to be held. It is also said that there will have existed in the registry of the Pombal Chamber different privileges, granted by the Infante D. Henrique, by El-Rei D. Sebastião, D. João his grandfather, D. Manuel and D. Afonso. Afonso, one of them, and the greatest of all others granted to this town, was not to be arrested fifteen days before or fifteen days after, except for crimes of lesa-majestade, anyone who came to these festivals, preceding justification of how he came or would come. Unfortunately, all these privileges were reduced to ashes by Napoleon’s army in 1811. Shortly after the implantation of the Republic, the oven was demolished and a few years later, the bishop of Coimbra, forbids the entrance of man in the oven, not only in Pombal, but also in the parishes of Santiago de Litém and Abiúl (Municipality of Pombal) and in Avelar (Municipality of Ansião) that had similar practice.

This ends the man in the oven, but the Cardal will continue to be the heart of the Festas. With the separation of Church and State, the Chamber appoints a commission that continues to hold the feast every year. Its traditions, however, will fall into disuse, as a description from 1881 tells us, in which decantadas and alvoradas were made, which had not been made for years. As the years go by, these parties are losing some of the sparkle of yesteryear, the uncertainty of its realization, the last minute improvisations of the programs, the monotony and lack of originality, are causing some discomfort among the population. But even in those years, the novenas and the solemn procession on Sunday, with a sung mass, sermon and a big procession, to which many people have continued to attend, have not been forgotten. In the 1930s, due to the great difficulty and little commitment of the Commissions to carry out the festivities, the possibility of making the festivities biennial was discussed. Strategies, policies and financing were studied in order to modernize them… But from 1935 on, with the creation of a commission with representatives of the Commercial Association, the Municipal Administrative Commission, and the Initiative and Tourism Commission, the Bodo Festival was reborn. The festivities exceed all the classic limits. The fenced enclosure, mimosely decorated, mixes its garish flowers with the enchanting freshness of the ranchos from other lands. They have aroused real curiosity and interest among the public in the bands from abroad, and their concerts were highly appreciated. But what most captivated the hearts of the people of Pombal was the cult of tradition, the soft gliding of the processions among the respect of thousands of believers, the monotonous leaping of the young girls, who emotionally visited for the first time the residents of the Várzea neighborhood. The Railways also contributed to the high number of outsiders, establishing special prices for Pombal and special trains that transported some of the bands and ranches. It is certain that 1935, gave a new impulse, which would be repeated in 1936 and 1938. In the year of 1937, the Commission of the festivities declined its charge and there was not the traditional festivities of the Bodo, although the monotony of the locality was broken by the solemn accomplishment of the religious part.

Over the years, the creativity and needs were adapted to each era, being created economic events, particularly in the agricultural sector (having even from the year 1980 the name Agro-Bodo), cultural activities and sporting events with national character. In 1991, it recovers the name of “Festas do Bodo”.
The festivities remained, arriving to our days and even in the years that will not have happened, never ceased to be present in the spirit of the pombalenses, demonstrating to be the most important festivities of the council of Pombal.
Nelson Pedrosa
Tec. Sup. of Art History