If you’re living in Portugal, or considering making the move, sooner or later you’ll have to deal with one of the greatest fears of all expats. No, not bureaucracy or kissing strangers on the cheek: We’re talking about learning how to speak Portuguese.

European Portuguese is often regarded as being difficult, but how difficult is it really? Like all languages it has its challenging features but nothing that a positive attitude and some persistence can’t help with. So, chin up and read on for our tips on how to learn European Portuguese so you can adapt to the country and your new life.

A few basics on European Portuguese

Although the Portuguese language derives mostly from Latin there are also quite a few words of Arabic origin, especially place names, with Algarve probably being the most famous example of that influence. Portugal has a fairly big Brazilian community but bear in mind that Brazilian Portuguese varies from European Portuguese in several aspects, including pronunciation and word order. Vocabulary can also be problematic in the sense that a word in European Portuguese can have a different meaning in Brazilian Portuguese or it may simply not exist (and vice-versa).

Over the last few years, there has been quite a heated debate in Portugal concerning the new spelling agreement (Novo Acordo Ortográfico). Good news for those learning Portuguese though: most people choose not to use it! 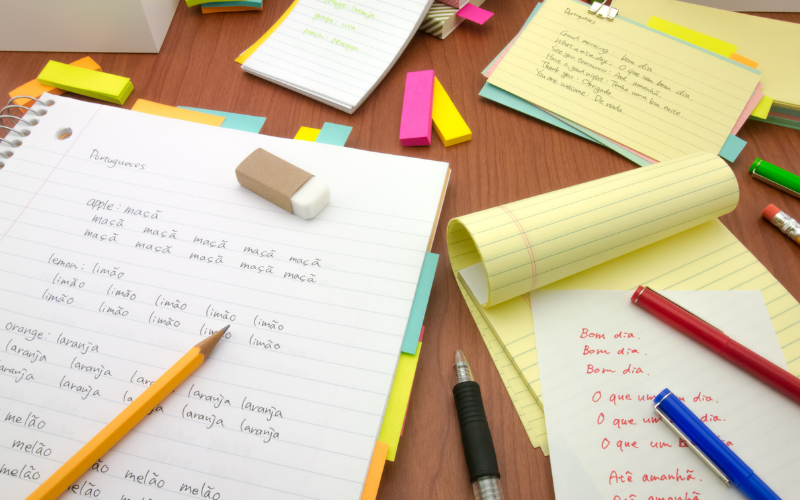 What is the best way to learn how to speak European Portuguese fluently?

The truth is it depends: everyone is different and has different needs. Some people prefer to learn European Portuguese using the traditional teacher Vs student method, either online or in a conventional classroom. This often means a structured study plan with a study guide and, of course, a teacher and other students on the same level as you to help with Portuguese practice. Many people prefer this method to get started in learning basic Portuguese, covering a good chunk of grammar, some conjugations, plenty of exercises and quite a few basic phrases.

Those who like to learn on their own will often choose one or several learning apps – beware however because some apps only have Brazilian Portuguese. People who already have to spend a good deal of time on the internet may want to learn European Portuguese with the help of exclusively online courses. Others still will choose to learn using their own version of the so-called immersion method by listening to the radio, reading, watching TV or just talking to their Portuguese neighbours.

Learning European Portuguese can and should be fun, so although persistence is key remember that it is OK to make mistakes! Besides, when learning a new language the passive skills (reading and listening) will always be better than the active ones (writing and talking).

In fact, even though there are plenty of guides to speaking Portuguese fluently, both online and in book format, regular fun conversations with that elderly neighbour who has plenty of time on his hands or with the lady from the bakery down the street may prove just as useful (expect to learn some slang, too!). This is especially useful because in Portugal from one region to the next there will be different accents and sometimes different words for the same things – that makes it even more important to try and talk to the people in your community.

Also bear in mind that in Portuguese there is quite a difference between the way people write and the way they speak, with a lot of nuances which are naturally part of dealing with a different culture. Generally speaking, the Portuguese tend to go out of their way to communicate with those who don’t know the language but it does pay to make an effort and reach out.

No matter your method of choice with a little perseverance you’ll find that in no time you’ll be able to learn and confidently use basic words, phrases and sentences in European Portuguese as well as hold basic conversations.

Learning European Portuguese is no doubt useful to help you fit in but it is actually mandatory to take the CIPLE Portuguese Proficiency test for those eligible to obtain Portuguese citizenship, although a few exceptions apply.

Where should I begin?

Pick a method that you believe will suit your needs but above all remember to have fun and keep an open mind about the whole process. Perhaps you’ll find out after all that another approach will be best for you. Remember you don’t have to learn a ton of European Portuguese grammar to be able to speak the language with ease. The most important factor is to connect and interact with your community!

Looking for a product or service from a business that speaks your language? Browse our directory of English-speaking, expat-friendly businesses across Portugal.