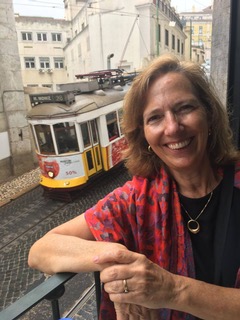 Where are you originally from? Edmonton, Canada

What year did you move to Portugal? 2006

Where do you currently live in Portugal? Parede

My husband and I lived in downtown Vancouver, in the heart of the gay district, the West End, where we’d hang out with our gay neighbors in cafés. Our children, a boy and a girl, were born there, and I was teaching part time. During the Vancouver Olympics there was a crackdown on the drug problem, particularly in China Town and other inner city areas. Our neighborhood was getting a bit edgy too. Drug addicts slept in the parks and playgrounds. It no longer felt like a good neighborhood to raise a family.

We moved close to the university where I was teaching and where Dave was working on his Ph.D. A friend called our new neighborhood “White Rhodesia” because there the homes were worth millions. We were renters and we didn’t belong. We did, however, make life-long friends and it was a safe and happy neighborhood for our children.

After 11 years in Vancouver, we decided our kids would benefit from the different life experiences of living abroad. I missed the quality of life in Europe (we’d lived in France when we were first married), something as simple as people sitting around the dinner table enjoying meals together. We’d loved France, and so somewhere south and near the Mediterranean appealed. Dave sent out his CV and when the offers came in we had a choice between Lisbon, Dublin or Singapore.

Someone once said to me, “We’re either pulled to the past or to the future.” Something was obviously pulling me to the past, because when we came to Lisbon for the final interview, what felt right to me was the experience of “Old Europe.”

In 2006, when the kids were 9 and 6, we moved to Portugal. At first, I wanted to live in a Portuguese neighborhood, make friends and learn to speak Portuguese, so we moved to upper Parede. Our realtor said, “You won’t last long here, you’ll want to be in Cascais with all the other foreigners.” And to an extent she was right. 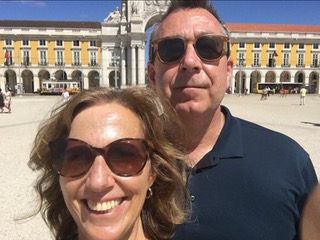 Meeting people was difficult. And we had an unfortunate incident involving a neighbor who didn’t like where we parked. Instead of leaving a note on the windscreen, they scratched the side of our car with a key. I felt discouraged. Until at a luncheon, sitting at a table with international women, all married to Portuguese, I was given some useful advice: “Don’t even try to integrate, we’ve lived here for years and it’s almost impossible. If you really want to make friends, get involved in the expat community.” For most Portuguese, the primary relationships are family and old family friends, which take up a significant amount of time. My Portuguese teacher concurred.

I joined International Women in Portugal and made many friends, and one British friend, a journalist, became my business partner. Combining our skills, we created an English language service-provider company. We taught a business English course at the university, and I also helped students write resumes, and people prepare for job interviews conducted in English, such as a woman who interviewed with L’Oreal in Paris.

It’s unlikely my children will stay in Portugal but I believe they will always see Portugal as their home. I can’t see retiring where we grew up or lived in Canada, even though I miss my family and good friends; the mild Portuguese winters are so liveable compared to Canada’s 40 below zero temperatures! For now, our plan is to launch the kids and then we’ll be free to consider if we want to live and work elsewhere or take a sabbatical for a period.

Louise Ross is originally from Australia. She has lived abroad for 35 years, first in the UK and France, followed by the United States. In 2014, she moved to Portugal, where she lives on the Estoril coastline, and from 2015 to 2017, Louise was President of the Executive Board of International Women in Portugal. Her book, Women Who Walk is available on Amazon.