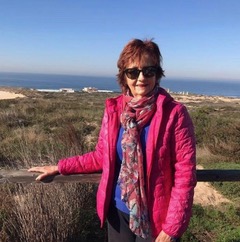 I was born and grew up in São Paulo and until the age of 13, I attended a British School called St. Paul’s. As is the custom in good British families I was then sent to boarding school in the U.K., but I was, of course, accustomed to Brazilian culture: I spoke Portuguese (and English) and my friends were Brazilian. I did not like the British boarding school experience and I did everything I could to get out of it. Fortunately, I would travel back to Brazil most holidays.

In the early 70s, I started working as a sales rep for Channel Perfume. The job involved traveling to Central and South America, the Caribbean, the U.S. and Canada. My first trip was to Central America when there was a lot of unrest, mostly in Nicaragua.

Ian, the man I eventually married, worked for British America Tobacco (BAT) as their Panamanian marketing manager. He was English, born in London, but he’d spent most of his life in Latin America. In early 1981, Ian was transferred to Nicaragua. We joked at the time, ‘the good news is you’re General Manager; the bad news is its Nicaragua.’

Despite the unrest, I felt I could cope because I could speak Spanish and I understood the culture. Also the revolution was just over when Ian was transferred there. Nicaragua had been under Somosa, the dictator, for 40 years. The Sandinista revolutionaries ousted him, taking control by the early ’80s. Once the Sandinistas were in power, they also took control of all the big companies, mainly because Somosa had shares in companies like Coco-Cola, the Rum Factory, and Flor de Caña. BAT never went to bed with the Somosa government so the Sandinistas had no shares in the tobacco company. It ended up that in our circle of friends, Ian was the only one working for a big corporation. Everyone we knew was either a diplomat or working for UNICEF, the U.N. or other aid programs.

I was in my early 30s (Ian was 24 years older), and I was happily married with two young boys. We lived in a house surrounded by a big fence and we had a gardener who carried a gun. Actually, everyone had a gun! There was a lot of fighting in the north, because of the Contras, the U.S. backed anti-Sandinistas. Every week there was someone at BAT who had someone near to them who had been killed. I chose not to go to the funerals, but each morning I prayed that nothing would happen to my family. 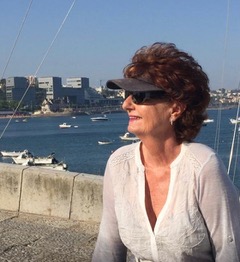 In 1991, when Ian was on the verge of retirement, we came to Portugal. We bought a house, and now that Ian was retired, we agreed that it was my turn to work. The role of Admission’s Officer opened up at our boys’ school in Carcavelos. I applied, got the job, and worked there for almost 20 years, until long after the boys had graduated. I retired in 2012.

I’ve lived in Portugal 29 years now and that’s the longest I’ve lived anywhere! It’s Old Europe here. It’s certainly not like Brazil. The European Portuguese are far more reserved. I have maybe two Portuguese friends, despite that I speak the language fluently. The internationals I meet here are fun and open – I can always find someone to relate to.

I feel Brazilian. That’s where I was born and grew up. When I go to England I don’t feel English, even though I sound British. I was educated in British-style schools, but I’m not from a particular place in the U.K. so I don’t feel I belong there. I interact with English people more here in Portugal than I do when in England visiting my sons and my granddaughter.

Her book, Women Who Walk is available on Amazon.