I first came to Portugal as a backpacker in 1986 when a South African-Portuguese friend suggested it. Liz’s family lived in Mozambique, the former Portuguese colony, and I met her through my ex-husband’s family. Along with another friend, we flew to Lisbon and then stayed in Liz’s parent’s holiday apartment in Carcavelos, just outside Lisbon.

I recall sitting at Carcavelos train station in the sun and it must have been shining on my hair because Liz said to me, “You know you have Portuguese hair.” She was pointing out that I could be Portuguese, but I didn’t think twice. In South Africa, there are a lot of people who have dark hair and olive skin.

Back then there was a popular disco in Cascais called Coconut, which is now the Hotel Farol. One night we went to Coconut and I met Liz’s cousin Rui. He was gorgeous! And the Latin music, it was so different from music in South Africa! We have an Afrikaans word kuier that means “to visit,” but it can also mean “to socialize” or “to party” – this is the word I would use to describe the experience I was having in Portugal back then. It was kuier.

The next morning, we left for the north with Rui driving us in his small car. He didn’t speak a word of English, but fortunately, Liz spoke English and Portuguese. We drove to Mafra, to Óbidos, to Nazaré – there were no highways in those days. It was a very powerful experience for me visiting places like Óbidos, where I saw ruins from the 11th century. South African and Afrikaans culture seemed so young in comparison. We arrived in Nazaré late at night and there was very little open except for one restaurant that was about to close. Fortunately, they stayed open and cooked clams for us, that’s all they had. We had a wonderful, rip-roaring time. 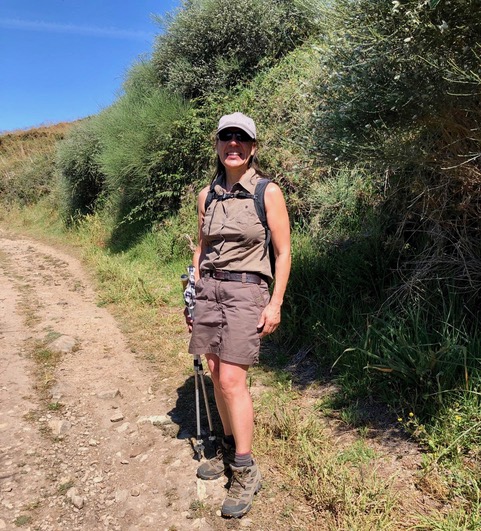 My parents were born in Cape Town and generally speaking, South Africans don’t care where their forebears are from. But backpacking in Europe, people questioned me about my heritage. As a result, once home, I asked my mother and she eventually traced three generations back and found Dutch and French Huguenots.

I also look like my father. He was born in 1920 and he was adopted. It wasn’t until my father was 80 that I found out about his adoption. Prior to that time, including while I backpacked in Portugal in the 80s, I had no clue.

His family raised him as an Afrikaner. He knew one of his parents was Portuguese, but tragically, due to Apartheid, Afrikaners discriminated against all people with dark complexions. If my skin had been a bit darker, that would have been problematic. The Portuguese, the Chinese, the Japanese, the Greeks, they were not considered ‘white’ by the Afrikaners.

My mother told me that my father had had the opportunity to meet his birth mother when he was 20-years-old, but he refused because it was shameful that his mother had become pregnant out of wedlock. He did not pursue finding his father either, presumably because he was Portuguese.

Living in Portugal now, I do feel as though I’m connecting with my father’s roots. When my German husband, Kai, and I were in Lisbon together for the first time in 2007, he looked at me and he said, “I can now see where you’ve come from.”

The longer I live here, the more I feel as though my heritage is in my DNA. I can see and relate to my father here. There’s no way for me to trace his family, but at times I’m aware that I could have relatives around the corner. Unfortunately, I will never know.

I realize I’m living in Portugal not just for me, but also for my father. I think he’d be proud. It’s tragic that he had a chip on his shoulders about being half Portuguese. The Portuguese are such wonderful people; I see my father in them and this is why I’m also very motivated to speak the language. I’m doing it for him.

Where is she now?

Rosemary divides her time between Portugal and Germany, but now that she has a business in Cascais, she is here more often. Her business evolved out of her love of hiking trails in the area around where she lives. She offers three different scenic car trips or eight-guided hikes either along the coast or inland, and she also offers lots of insider tips along the way. www.my-cascais.com

Astrid: Mum of 2 living in Sintra