Terry (left) and Tim at the “Curry Club”

Excerpted from The Winding Road to Portugal: 20 Men From 11 Countries Share Their Stories

In my early 30s, I set up Business Networking International (BNI), a business-to-business networking franchise company, first in Liverpool and then in Manchester, Lincolnshire, Cheshire and Scotland. And then I was offered the job of BNI National Director for the U.K. and Ireland.

I was in London for a meeting. Just the week before, Elaine, my wife, had found out we were going to have our second baby. I called Elaine to see how she was feeling. She told me, “I woke up last night thinking I can’t do this if you’re going to be away all the time. This is not the life I want.” And then she asked me, “Why are you doing this?”

My best friend Dean came over to the house in Liverpool, sat me down, and said, “Listen if you take this job, you’re going to screw up your family. You have everything right here: a great life, family, friends, a social life, it’s all right here!” He was absolutely right.

I didn’t take the offer.

Elaine and I were on holiday in the Algarve and one day she made the comment, “Instead of the shitty rain in the U.K., why don’t we do BNI meetings in the sunshine?” I bought the rights for BNI Portugal in 2003. Over the next ten years while we were still in the U.K., we had a couple of different guys manage the Portugal franchise, but not very successfully. So in 2013, we moved here, when the kids were still young enough to start over in a new school without missing their life in the U.K.

The expat community has been fantastic to us. I’m a boxer and hairdresser from Glasgow with no education and I’m networking here with multi-millionaires. I have a reputation for setting things up, like the Cascais Curry Club that I started with a friend. It began as ‘two guys going out for a beer and curry.’ It evolved according to three rules: 1) drink beer; 2) drink wine; 3) eat curry. No more rules. Who would not want to join?

As of September 2019, there are 540 men and women in the Curry Club. We’re basically a social club. We meet the last Thursday of every month in a garage that’s actually the basement of an apartment block owned by Tim, a South African entrepreneur living in Cascais. The club is an important part of my life because when you’re an expat entrepreneur, you need community; you need to get together with people from diverse backgrounds. You can’t sit in your ivory tower and just watch the sea.

In that sense, the social aspect of the club is very important. And if there’s business to be done, we encourage everyone to make connections, have conversations, but to conduct their business outside of the club. It’s been a great networking source for me. For instance, I met and partnered with Tim and we subsequently set up several new businesses, which we run together. These include The Brave Generation, an entrepreneur’s club for kids between ages 11 and 16, and the Inventors Club, an after school club for kids that we want to expand globally.

These businesses came out of us sharing stories after Curry Club hours and deciding that we’d build and grow some ventures together. Our intention with these projects is to make a difference because our passion and focus is on kids’ education. All of the projects I’m working on now are geared toward creating space for kids to grow, to feel safe – space that encourages kids to feel good about themselves. 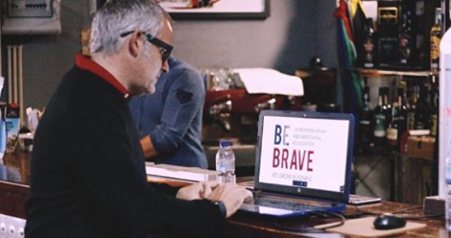 Terry working on The Brave Generation

During one of the lead-in sessions with The Brave Generation kids, we have a discussion about who their heroes are, how to handle fear, how to look after yourself, how to be good to others, and the effects of bullying. We’re trying to prep the kids, who are 60 percent Portuguese and 40 percent international, to be ready for whatever life throws at them. Our goal is to ensure that they feel able and capable and well-resourced emotionally. The kids are brilliant; they go crazy at the opportunity to be creative.

I have that entrepreneurial itch where I’m always focused on the next idea. I am content with what I have: a beautiful family; an amazing wife who’s tolerated me through the highs and lows, and some really shitty times; and living by the sea in Portugal, which is gorgeous – but with the goals I’ve set myself, – I’m never truly happy, just driven.